A Certain Kind of Magic by Jessica Starre

By: Jennifer Lawler
In: A Certain Kind of Magic
With: 0 Comments 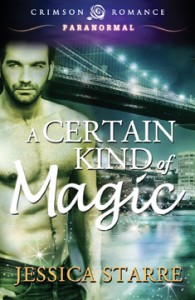 A Certain Kind of Magic by Jessica Starre
When NYPD police detective Morgan Reilly discovers the lamp and frees the djinn, she thinks she’s hallucinating. After all, she’s just back on the job after a high-speed chase left her with a head injury, and it’s not the first visual hallucination she’s had since the auto accident.

But freeing the djinn brings Mere, an exiled merman, charging into her life. He and his sidekick, Lynell, an elf, failed in their duty to protect a dragon’s hoard that was stolen centuries ago. All this time they have sought to get it back.

Because Morgan can see him although other humans can’t, Mere must enlist her help in finding the hoard before the human sorcerer into whose hands it has fallen can learn its secrets. But first he must convince her that he’s real.

2012-11-16
Previous Post: Keeping the Peace by Alicia Thorne
Next Post: Children of the Wolves by Jessica Starre