By: Jennifer Lawler
In: Inventing Sin
With: 0 Comments 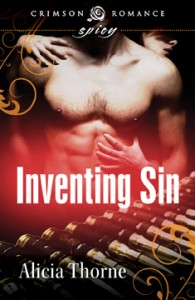 When English professor Gabriella Kurtz is dumped by her ho-hum boyfriend because she doesn’t have the energy to do the breaking up herself, she knows a drastic change is in order. But she’s not counting on just how drastic the change is going to be . . . .

While she’s reinventing herself as a hot sexy chick, Gabriella imagines her perfect man.   Big and masculine but gentlemanly, he’s going to take one look at her and then it’ll be mind-blowing sex all weekend.  That’s what she wants.  That’s what she tells her colleagues she . . . already has.  Because she just can’t stand the fact that everyone knows she’s been dumped by a boring academic colleague.  What’s wrong with an imaginary boyfriend to shield her from the worst of the humiliation?

And that’s when Duncan Sinclair, Sin to his friends, enters the picture.  Ex-military, now working for an oh-so-secret government agency, he’s on the hot seat.  Take out an undercover terrorist posing as an accomplished academic, his boss tells him.  Sin gets the game plan: the terrorist will be giving a talk at a big Midwestern university.
When Gabriella’s colleagues mistake Sin for her imaginary boyfriend, he thinks she’s set up the situation to provide him cover, which means she must be a deep-cover asset.  Brilliant deductive reasoning. Except it’s wrong . . . .