Love by Design by Jenny Jacobs

By: Jennifer Lawler
In: Books, Love by Design
With: 0 Comments 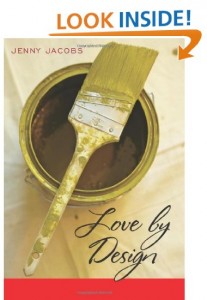 Love by Design by Jenny Jacobs

Tess Ferguson has a weakness: taking in strays. She’s a seamstress with big dreams, but she’s also a single mother with more practical matters on her mind. When Tess’s sister (and boss) Greta, an interior designer, is laid up after knee surgery, Tess must be her go-between with Michael Manning, the sweet, sexy owner of a carpentry business. Though Tess is attracted to Michael’s calm, quiet strength, she’s convinced he’s just one more stray destined to cause her trouble.

Michael is drawn to Tess, whom he finds warm, open, and likable. But her curiosity and persistence in asking questions he doesn’t want to answer threaten his hard-won peace. By burying himself in his work, he can forget about the shacking death of his wife and unborn son–and the unhappy secret she left him with.

Though Michael and Tess try to ignore their growing attraction for one another, sparks begin to fly as the two tackle a joint project that has the potential to make more than just their careers.