By: Jennifer Lawler
In: Night Blooming Jasmine
With: 0 Comments 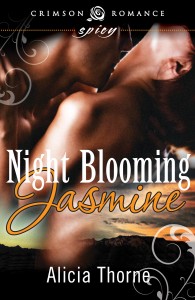 Every time psychologist Jasmine Zehr thinks she’s outwitted her stalker, she discovers that he’s found her again. This time, though, she’s playing for keeps. She holes up in a desolate area of the southwest, armed and ready for him. When he attacks, she shoots him point-blank.

More terrified than ever, Jasmine runs, her stalker in close pursuit. This, she knows, is their final act, and one of them won’t make it out alive.

For many years, Rhianen has followed the traditions of the Brotherhood, an ancient order whose members have always served as demon-hunters. In contemporary society, they must cloak their purpose, but they never fail in it. On the morning when Jasmine runs from her stalker for the last time, Rhianen is assisting one of his brothers and discovers Jasmine, unexpected and in need of help. Acting on instinct, he grabs her and the two outrun his pursuers – only to confront her stalker. When Jasmine describes his evil, Rhianen knows that he is a demon in human form, and the only way to kill him is with the specially-forged sword all members of the Brotherhood carry.

Jasmine doesn’t understand quite what happened – and Rhianen doesn’t think she’s ready to hear about demons in human form – but the two of them acknowledge their attraction. As Jasmine is snared deeper into the life of the Brotherhood, she must decide if she can embrace the future Rhianen believes is her destiny – or if she should return to the only life she’s ever known.