By: Jennifer Lawler
In: Ruby's Reward
With: 0 Comments 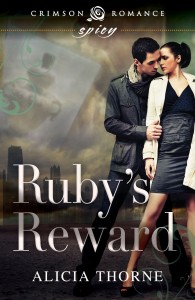 Ruby Rendell is a talented artist. Can she help it if people sometimes mistake her work for that of Renoir or Titian? Her vindictive ex, Ian McElroy, certainly thinks so. In fact, he’s convinced that she has kicked it up a notch and is actively involved in the illegal trade of stolen artworks and antiquities.

This would not be a problem, ordinarily. She knows how to deal with Ian, an investigator for Interpol. It’s his young sidekick, Raphael Gianetti, with his angelic face and his devilish body, who’s going to bring her down – without meaning to. When she finds out he’s been lusting after her as long as he’s known her despite their age difference, she does the one thing she promised herself she’d never do again: she lets her body outwit her brain.

As the investigation gets hotter, so does Ruby’s affair with Raphael, even though he’s taking orders from her worst enemy. When she realizes their playful fling has turned into something deeper and more profound, she has to decide whether she can trust Raphael with her secrets. Because if she doesn’t, he’ll never trust her again.