By: Jennifer Lawler
In: The Achilles Project
With: 23 Comments 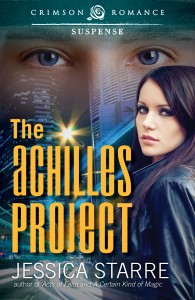 The Achille Project by Jessica Starre

Jessica’s favorite book is invariably her newest release, although she’ll always have a certain affection for A Certain Kind of Magic. Only because it makes her smile every time she thinks of it.

The Achilles Project also has a special place in Jessica’s heart because it’s the most demanding book she’s ever written — with lots of threads to pull together and a number of point-of-view characters other than the hero and heroine.

Like several of her books (including Children of the Wolves) the idea for The Achilles Project came to her in a dream. It was a deeply weird dream, but also very emotional. There was something so compelling about it that she dropped everything to write the first draft — which took forever because it was a loooooong book. She has trimmed it down, leaving only the interesting parts, so hopefully you will love it as much as she does.