The Matchmaker Meets Her Match by Jenny Jacobs

By: Jennifer Lawler
In: Uncategorized
With: 27 Comments 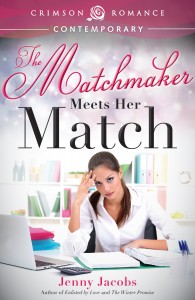 The Matchmaker Meets Her Match by Jenny Jacobs.

Rilka Árpád inherited her name and her job from her grandmother. She doesn’t mind her name; it’s her job she can’t stand. Working as a matchmaker has exposed her to all the downsides of human behavior – in her opinion, it’s a wonder anyone can stand each other long enough to get through a date, let alone cherish each other forever.

She makes herself a promise: if she can just get through her current client list in the next three months, she’ll go on sabbatical. And maybe never come back.
Her new client, war veteran Jeremy Ford, ends up being everything Rilka has come to expect (and dislike) about her work when he announces that he just wants to get laid. At least he’s honest.

Or so she thinks. It turns out that Jeremy wants a lot more than a one-night stand, and he wants it from Rilka. But the only way they can get to forever is if Rilka learns to trust her heart.