By: Jennifer Lawler
In: The Winter Promise
With: 0 Comments 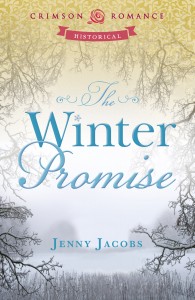 The Winter Promise by Jenny Jacobs

There was a time, Dear Reader, when Jenny Jacobs lost faith. Yes, hard as it is to believe, Ms. Sentimental, Ms. I-Love-Kittens, Ms. True Love — she lost faith. She thought that perhaps, maybe, it was possible that love did not conquer all, that there was not someone for everyone, and that happily ever afters might not — well, she never went that far.

But she did have a crisis. And so when she tried to write her next romance (after Cold Hands, Warm Hearts) she felt too cynical.

I know! It surprised all of us, especially Alicia, who has never let a bout of disillusionment stop her. But it stopped Jenny.

And one day it popped into Jenny’s head that even if in this cruel and callous modern time true love did not exist, there may well have been a time when it did.

Fortunately, Jennifer (not to be mistaken for Jenny) had gone to graduate school and studied early medieval literature, which is very romantic, and also quite blood-thirsty, and she suggested to Jenny that she might set her next novel during this time period when love did conquer all.

Jenny took her advice and set her next book in early medieval Wessex, and now you can find out if the cure worked.

Find out more about The Winter Promise by clicking here.