An excerpt from The Improbable Adventures of a Middle-Aged Woman (now available!) 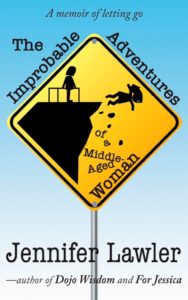 The cab driver has intense crazy eyes. I see this right away as he stands by his cab, waiting for a fare. The crazy eyes make him my kind of guy so I hand over the bags and tell him where we’re headed.

We’re in Munich. Since I was bred on war movies and spy thrillers, the word Munich sends a little shiver down my spine.

It turns out that Munich is charming, and that somehow makes it worse, because it’s not melodrama that way, with leering villains twirling their mustaches, it’s ordinary people, people who smile and hold open a door, who do the nightmare things. People like you and me. You and me. I think I speak for all of us when I say I would much prefer it to be monsters, the kind you can see coming from a mile off.

Eventually I integrate this new knowledge with the old, that this place can have contained horrifying acts while brilliant red begonias spill out of window boxes and everyone has a friendly smile (“That’s because they know you’re leaving,” a cynical acquaintance tells me later.)

The cab driver turns onto a narrow cobblestone path that cannot correctly be called a street but he drives down it anyway in order to deliver us to our pension in Marienplatz.

Here there is another blonde Ukrainian but also behold: a lift, the first lift in all Europe. It is too small for more than one person at a time, so I put Jessica aboard with a bag, then tromp up the stairs with everything else to meet her on the third floor, the duffel bag hitting my butt with each step.

We get inside the room and I collapse on one of the beds for a minute and she says, “Good thing there’s an elevator.”

When I am capable of ambulation, which doesn’t take as long as Jessica thinks, we go out into the plaza. Our travel rule is that we must first explore the area around our hotel so that we can always figure out how to get back.

Just down the alley from our pension I spot a clock tower.

It turns out that this would work better if there weren’t clock towers on every street corner in Munich.

“Okay,” I revise. “The clock tower by the tourist shop that sells gingerbread.”

Then: “Okay, the clock tower by the gingerbread shop that is triangular in shape, not square like that one—”

In this higgledy-piggledy collection of buildings in the city center, you could conceivably trudge aimlessly for a week without ever finding your way back to wherever you are staying.

“On the prairie, they lay everything out in a nice grid,” I say to Jessica. “The numbered streets run east-west and the named streets run north-south, or vice versa, and either way you always know where you are in relation to where you want to be.”

“Uh huh,” says Jessica. She doesn’t tune me out a lot but when she does, it’s fairly decisive.

We wander the streets and I marvel at the buildings. They look so German! Just what they are supposed to be. In the square is the famous glockenspiel, and it is exactly right, too. I find that I am standing behind a man playing accordion in front of said glockenspiel, which means I am in a million summer vacation pictures. I step aside as a woman in a bright red hat pedals her bike past.

A boy is chasing pigeons while another is feeding them. Both are about the same age. I think this is the world writ small: half the people think it’s okay to do whatever you want no matter how terrifying it is to the pigeon, and the other half is trying to save the world from the first half.

Then I realize there is a third role, mine: the one who is watching.

We stop for ice cream at a stand run by a tall blond young man with icy blue eyes, exactly the kind of guy you see playing the part of a skinhead in a movie. Every time we stop by, he remembers that it’s still, not sparkling, water for me and vanilla ice cream for her. He flirts with both of us impartially the entire time we’re in Munich. He is adorable and scary.

“Okay, so we’re staying at the pension near the corner that has a triangle-shaped gingerbread shop by the clock tower with the ice cream stand at a diagonal to it.”

“Or you could write down the names of the streets,” Jessica says.

In this we are opposite. Jessica can look at things but she won’t remember them. Unlike me, she can look at a map and use it to get from here to there.

I pluck one from the stand at the square-shaped gingerbread shop and hand over a few euros.

“Here.” I give it to Jessica. “Between the two of us, we’ll always find our way back.”

###
The Improbable Adventures of a Middle-Aged Woman is now available in print and ebook formats.

If you’re looking for a lovely Mother’s Day gift, check out Jessica’s glass at www.jessicalawlerkay.com. Order by May 8 to ensure delivery in time for Mother’s Day!