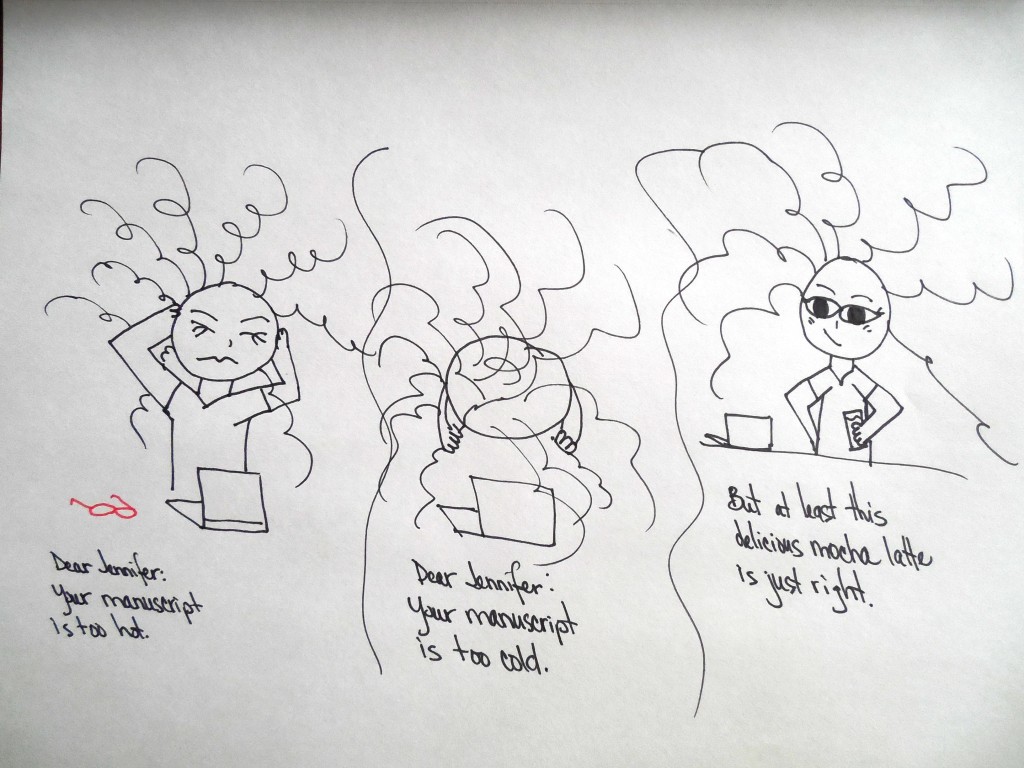 Every time a writer asks me, “Do you think if I do what this editor suggests, my novel will get published?” I have to pause to experience a moment of pity before I can respond. If only it were that simple.

Let me explain. In one corner are those editors who you might hire yourself to get your book ready for self-publishing or just to help you figure out why you’re not succeeding. These editors are not unlike the friends or colleagues you dragoon into reading your manuscript and whose responses you keep in mind while you’re revising. They are the editors who might have great ideas but they’ll never be able to offer a publishing contract. When you get advice from these editors, you have to consider whether it makes sense, suits your overall vision for the book, and is an actual improvement instead of just a change. So if that’s the kind of editor who has made the suggestion, all I can say is you know better than I do whether you should revise.

Then there are the editors who could publish your novel but they have no plans to do so. They usually send form letters and sometimes writers mistake these for something else. “When the editor says, ‘Not quite right for us,’ do you suppose it’s because I’m two thousand words over their stated word count?”

No, I don’t suppose that. Because if the only thing standing between you and glory was two thousand words, the editor would have said so: “This is an amazing novel but it is too long. Can you shorten it by two thousand words?” And if you got a note like that then my answer to the question would be yes. Yes, I do think if you were to do what this editor suggests, your novel would get published.

You can usually identify an editor who wants to work with you in this way because she will say so: “This was a terrific read but I didn’t love the ending. Would you be open to revising?”

Or she will say, “This is just not my cup of tea but send me your next novel.” So you know what to do, right?

But the not-quite-form rejections are the ones I hear about most, where the editor says something like, “I found the plot engaging but I just couldn’t get interested in the characters.”

Editors will sometimes explain a rejection instead of just sending a form rejection because they think you have promise and they want to give you a little encouragement. Sometimes it’s because you’ve submitted through an agent and they want to maintain a cordial relationship with that agent. Now and then it’s because the editor has worked with you in the past. (This happened to me once and the pain is still fresh.) Many, maybe even most, times these not-quite-form rejections are just rejections. It wouldn’t matter if you made the characters more interesting. The editor still wouldn’t buy the book. She didn’t like it. She’s never going to like it unless you write a new book. Then she might like that one.

An editor who is not buying a book is not spending a lot of time analyzing how and why it isn’t working for her. She just doesn’t have time for that. She’s not trying to be a mentor or give you a blueprint for revision, she’s just telling you she thinks the book may have had good points but it’s not going on her list, thank you anyway. So, no, I don’t think revising the book according to her suggestions will, necessarily, get you anywhere. On the other hand maybe she’s pinpointed a problem that suddenly you recognize as the reason why your book isn’t working and yay! You know what to do.

I know what you’re wondering now. You’re wondering, if you get a rejection like this, with no invitation to revise and resubmit, should you revise your novel anyway for the sake of future submissions? On the grounds that Editor B will like your novel because you fixed the problems Editor A identified? A lot of writers think the answer is yes, but my answer is a resounding maybe. Just because Editor A has a problem with, say, your characterization, that doesn’t mean any other editor on this green earth will. Editorial opinions are subjective. They may be informed opinions, but they are still just opinions.

Now, if all of your rejections are saying much the same thing then you can assume that fixing that thing would help. If Editor A says, “I couldn’t follow the plot” and Editor B says, “The plot made no sense to me” and Editor C says, “I liked the characters but not the plot,” you’ve got the kind of consensus that suggests something’s wrong with the plot. So you know what to do.

[Note that the same general principles apply to querying agents.]

I kid you not. Exactly how would I have revised the book to make both of these editors happy? I didn’t try. My agent went on to find Editor C, who thought Dojo Wisdom was just right, and who managed to publish it quite successfully.

If you sign up for my newsletter, you’ll get a free ebook version of Dojo Wisdom for Writers. Just type your email address in that little box that’s on the right-hand side of your screen unless you’re looking at this on your phone and then I don’t know where it is. Oh! Don’t forget that I’ve collected some Jessica stories in Travels with Jessica.

My buddy Jill Haymaker has a novel releasing today! Breakfast for Two is available on Amazon here.

And I love this tidbit sent along by writer Lynn Crandall: “A scent by any other name may be an odor. Unless my heroine has just been cleaning stalls, I don’t want to use the word ‘odor’ in her description. In writing a scene describing my heroine, I knew she didn’t ‘smell’ and she didn’t have an odor, but I’d used the word ‘scent’ a lot. My mind reached for the just-right word. Then I found a website that offered some help, here. It prompted the word I’d been looking for as well as a suggestion for a name of the scent. Sometimes a little help is needed.”