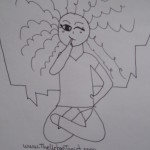 When I began writing the Dojo Wisdom series, my daughter was very young, I was recently divorced, and I had no idea what the future held. But I knew one thing: I would kick its ass.

At the time, I was a second-degree black belt in Tae Kwon Do, immersed in martial arts training. I spent a lot of time teaching other people how to do front kicks and back fists. I also spent a fair amount of time teaching a warrior attitude: if it fucks with you, a knee to the groin is never wrong.

But life, it turned out, wasn’t about to back down: A minor head injury—not from martial arts but from a carnival ride!—gave me persistent vertigo, which made it almost impossible to do any kind of training more intense than going for a walk; a financial disaster meant goodbye dream of someday retiring; and then, a few years ago, an unexpected and devastating diagnosis: my daughter, already suffering from massive disabilities related to tuberous sclerosis, the rare disease she was born with, developed a degenerative spinal cord disorder. Two high-risk and terrifying surgeries stabilized her condition but she wasn’t cured; there is no cure.

By this time I was older and my knees creaked and pushing myself hard didn’t result in miraculous gains, it resulted in my lying in bed all weekend with a heating pad and a bottle of Aleve.

I wasn’t about to give up—you know that. But the external practice of martial arts—the kicking of asses—wasn’t what helped me through this time. It was the internal practices. Call it martial arts for the middle aged or Tuesdays with Tao. It is a method of keeping the warrior spirit alive even as we age.

I began my journey in the martial arts many years ago but I stopped writing about it after the Dojo Wisdom series ended. At the time I felt I had said everything I needed to say. Now, a bit more than ten years later, I find that I had barely begun saying anything. Hidden beneath the techniques I knew and taught other people were even more important principles. But to access them required a deeper understanding of life.

This isn’t about how to save up a lot of money or lose weight or like that. I think you’re already perfect. I am a little concerned that you’re not having as much fun as you could. But this isn’t about personal improvement or how you need to stop spending so much time on Facebook or you’d be so much more fulfilled if you set up an orphanage in Belize or like that. It is about experiencing life with joy and courage, even when there is loss and uncertainty and pain. To learn how to live in a new world you didn’t know you were traveling to until you got there.

Here’s an example. Back in the day when I was literally instead of figuratively kicking asses, I talked a lot about how visualization was an important part of success—that you could reach your goals if you visualized yourself doing the actions that would help you get there. Like, you could visualize yourself performing a kata even if you were standing in line at the DMV and couldn’t physically perform the routine. Or before a test or a tournament, you could visualize yourself bowing to the judges, performing whatever it was you were going to do flawlessly, really seeing yourself succeed.

And it works. Of course it works—there are even scientific studies that show it works. But there comes a time in life, or at least there came a time in my life, when achieving goals wasn’t particularly motivating any longer and visualizing success felt more like saying, “I’ll be so happy when . . . .” which is to say, too forward-looking for me. Putting the reward in a future that held no such promises.

I am talking about being afraid my daughter would die, right now, today. I was not really in the mood for visualizing a book launch party. What I wanted was to be happy now, not in some mythical when. I wanted to be able to be with my daughter, to experience this thing, but not let it overwhelm me, to be able to be present and immersed in what was happening, not dismissing it or pretending it wasn’t there, but being okay with it or being better than okay: being joyful.

And then I would try to carry it with me.

Sometimes I spilled it all over the floor. A lot of times, actually. And often it would take me a long time—days, even—to be able to try again. But I did try, I would take a few minutes and go back and find that feeling. And after a while I got pretty good at holding on to it for hours at a time. I got good at being able to go back and find it again after I lost it. It wasn’t easy. It took work. It was worth it.

After a while I stopped having to go and find that feeling. It would be there when I woke up. Sometimes I would have to blow on the flame a little. Sometimes I would forget that I wanted to be happy. But I always remembered after a little while.

It has been a long time since visualizing success in a sparring match has helped me through a day. But learning how to call up joy in the face of uncertainty and pain has made it possible to get through very many days and very many tests.

That is what I mean, and that is what I’ll be writing about each week this year. If you haven’t already read Dojo Wisdom, you can find it here. You can get a free ebook version of Dojo Wisdom for Writers just for signing up for my newsletter (just jot your email address in the signup slot). I hope you’ll join me on this new journey.